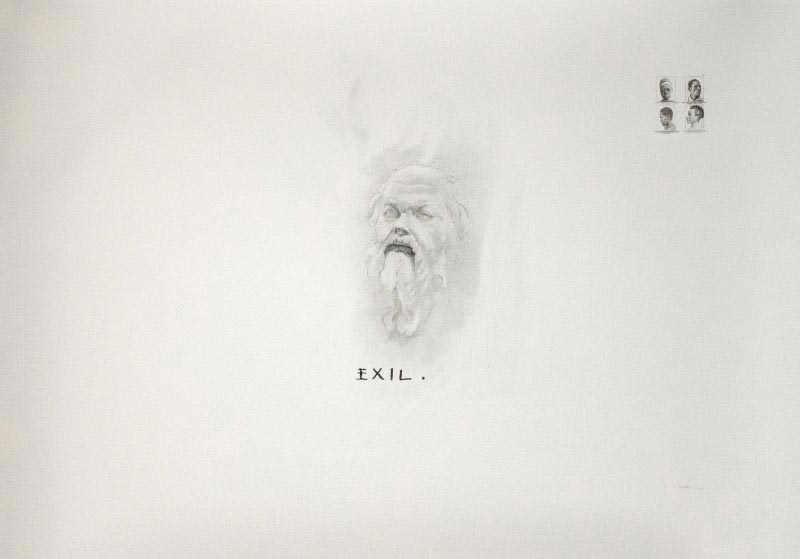 Some populations and civilities have the habit to burn corpses of their deceased. This tradition was also used by Greek: in their rituals the soul was allowed, guided by Hermes, to travel towards the Underworld and to Heaven or to reincarnate, in accord to their believes, like in the Orphism and Platonism. Only ashes are left as memory and trace: mourning that follows the words of the ones who stay. Epic poems and tragedies are, perhaps, nothing else than the ashes from which reborn and survive all the culture from which the west history has been established and determined.

Nidhal Chamekh’s creations, not in the same way, fulfil something similar. His artworks talk and put on stage another memory, aiming to be more authentic. Trace and ash call to mind different historical events to give them a more precise look and to promise justice. From line and drawing to execution and arrangement, a meticulous work and a constant effort have been developed to follow the memory in its transformation and in his passions. In this transition, look transforms itself: we are not the only ones who can see, artworks start to ‘look’ at us. They watch and change our space and our memory, creating a new world and a new history.

The Smiling Hannibal looks at us. He welcomes the visitor in a totally different shade from the one which marked him during all the European history (such shade that comes from the original sculpture discovered in Capua and allocated to the Carthaginian strategos and political leader).

Adding a sarcastic smile on Hannibal lips Nidhal Chamekh has been capable to transform the distance that has always put the viewer far from the Roman Empire’s enemy. Thereby Nidhal is questioning all the distances that Europe, Rome heir, places nowadays before the Others: among them there are north-African migrants, Hannibal’ sons. Irony destabilizes the stereotyped relationship, which a certain tradition has tried to impose through ages. It is placed on the edge, between the Outside – the Mediterranean Sea - and the Inside - an anonymous immigration office. Smile placed on an always forbidden and always broken boundary that will follow the visitor in a despotic way and will force him to move his traces and memories.

On the background, where ancient and modern history blurs, the latter loses its benchmark. There is a series of three big drawings inspired by pictures, showing the murder of the young poet and activist Fadhel Sessi during the Tunisian Bread riot in 1983. On white canvases, as cinematographic screens, projecting the moment of death overexposing the laying corp, Nidhal not only turns this tragic moment into the creation of an hero, but also gives testimony

of the shocking violence, peculiar of the despotic regimes in Mediterranean populations. The martyr becomes memento of fight for dignity and justice but also a recall of disillusions, which experiences everyone during their European desperate trips. Drawings place us in front of images where time and death, open to new interpretations. As if an old movie, the grain is the ash of burned bread, making us reminding and living a history full of hope, sacrifice and violence. As dead’ souls used to cross Styx river, Nidhal Chamekh represents the migrants memories in their naval and terrestrial circumnavigation.

In the neon-made artworks we can read, idiomatical Arabic, expressions, conveying the same passion and grief felt by exiles through their journey: “France you mistreat me!” and “Burn”. The first one is written in the French flag colours and shows what collective memory sings of whom suffer while passing through foreign and hostile, countries. The second word “Burn” (El Hargah) expresses mourning itself, symbolized by the destruction of identity cards of the ones who illegally cross the sea towards Europe. Perhaps this word, lighted up in the aquarium is the clearest and burning trace of the transmigration of our deepest part. In the darkness of an even smaller world, where proximity is banned, something lights up from the abyss: which crossing is at our own risk.

What is left of memory after cremation? A promise of remembrance. Probably.
In the drawing series “Mémoire promise” (promised memory) the line becomes each time less intense, split and overlapped. Through partitioned and measured limbs, fragments of incomplete texts and old pictures of colonies, memory cannot be rebuilt in a single figure. It hides and lives mixed up with fractures and oblivion. It swings between disorienting ghosts and a persisting and wakeful will of anatomic dissection. Presence of hands reflects the will of teaching, learning but also the self-contemplation of such teaching through the analysis of the arm. Eyes, popped out of head and sometimes wide open, try to give back to the gaze its own aim or try to promise justice. Anyway, visitors are lead to a change in perspective and to a different way to watch. Through his artworks, Nidhal analyses his point of view and submit it to new challenges and experiences: he rearranges and adapts it. This adaptation contains the highest level of politic will.

It is not only an aesthetic behaviour, rather an adjustment that fights for justice: to a more even relationship with others and with the outer world.